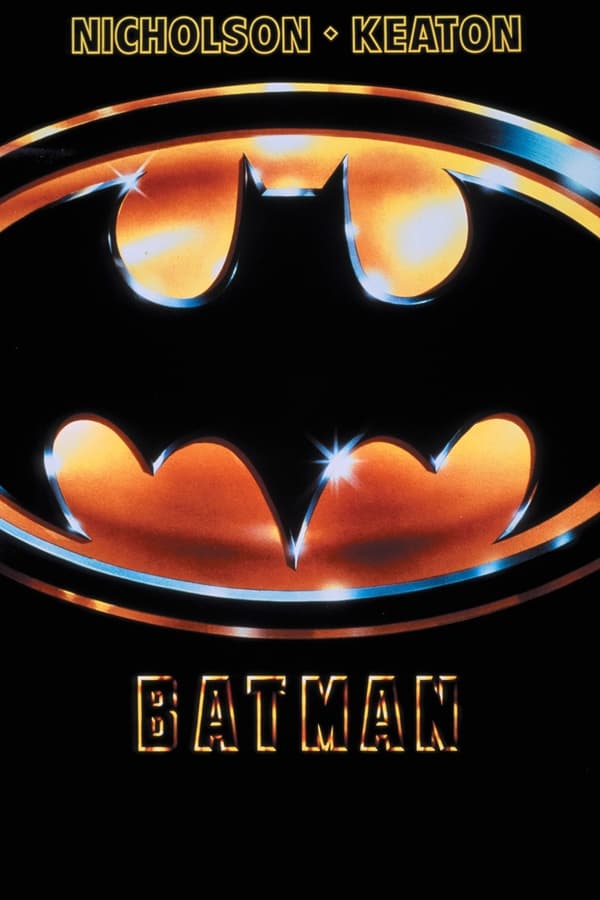 
Having witnessed his parents' brutal murder as a child, millionaire philanthropist Bruce Wayne fights crime in Gotham City disguised as Batman, a costumed hero who strikes fear into the hearts of villains. But when a deformed madman who calls himself "The Joker" seizes control of Gotham's criminal underworld, Batman must face his most ruthless nemesis ever while protecting both his identity and his love interest, reporter Vicki Vale.

Have you ever danced with the devil in the pale moonlight?

- Robin Williams was offered the role of The Joker when Jack Nicholson hesitated. He had even accepted the role, when producers approached Nicholson again and told him Williams would take the part if he didn't. Nicholson took the role, and Williams was released. Williams resented being used as bait, and not only refused to play The Riddler in Batman Forever (1995) but also refused to be involved in any Warner Brothers productions until the studio apologized.
- Jack Nicholson said of his role, "The thing I like about The Joker is that his sense of humor is completely tasteless." He later said The Joker was one of his favorite roles he played.
- Jack Nicholson received a percentage of the gross on the film, and due to its massive box-office take, he took home around $60 million. As of 2003, it is still the single-movie record for an actor's salary.
- Jack Nicholson had a strict schedule stipulated into his contract that his casting call was to be later than most actors and actresses on the set. Jack was known for having late evenings up to 3:00 a.m. before he would get home, as he dined out every night, or attended small parties. Michael Keaton would arrive early in the mornings, and Jack would come in around 10:00 a.m. at the earliest and greet Michael, then sit on his chair. He would then tilt his head back and fall asleep immediately as the make-up artists worked on his prosthetics.
- (at around 6 mins) Michael Keaton came up with the famous "I'm Batman" line, in the script, it was "I am the night".
- Don Johnson, Dale Midkiff and William Petersen were considered for Harvey Dent. Billy Dee Williams took the role with the expectation that he would be brought back to play Two-Face, and reportedly had a contract clause added reserving the role for him. During casting for Batman Forever (1995), Warner Brothers decided they preferred Tommy Lee Jones, and bought out Williams' contract. Williams voiced the character in The Lego Batman Movie (2017).
- Domestically, it was the highest grossing movie of 1989. Worldwide, it came second to Indiana Jones and the Last Crusade (1989).
- In order to combat negative rumors about the production, a theatrical trailer was hastily assembled to be distributed to theaters. To test its effectiveness, Warner Brothers executives showed it at a theater in Westwood, California to an unsuspecting audience. The ninety-second trailer received a standing ovation. Later, it would become a popular bootleg at comic book conventions, and theater owners would report patrons paying full price for movie tickets just to have an opportunity to see the trailer, and leaving before the feature began.
- Michael Keaton, who calls himself a "logic freak", was concerned that Batman's secret identity would, in reality, be fairly easy to uncover, and discussed ideas with Tim Burton to better disguise the character, including the use of contact lenses. Ultimately, Keaton decided to perform Batman's voice at a lower register than when he was portraying Bruce Wayne. This technique became a staple of future portrayals of Batman in film, television, and video games, especially those of Kevin Conroy and Christian Bale.

The Joker
By Jack Anderson

6
I remember watching Batman as a kid and being quite impressed by it. Visually, the film is quite strong, you can truly believe in the world of Gotham City. Tim Burton was a good choice for the film.

JOKER
While the movie is quite flawed, Jack Nicholson is perfect. His portrayal of the Joker is just stupendous. Pure magic. Once again, the kid that I was was very impressed by it.
Nicholson was simply the perfect choice and each of his appearance is a complete delight.

ICONIC
What the movie does best is its iconic look. Again, as a child, I watched it being very impressed.

NO MAGIC
Still, there is no magic happening between the other characters than the Joker. Michael Keaton is spending a big chunk of the movie looking at things with a strange face. I don’t think it worked very well. At the same time, the character of Kim Basinger was classic and did not go over the top. They did the job, but not more, in my view.

PRINCE
I do not know who had the idea to feature some original music from Prince, but that was clearly a bad choice. It feels totally out of place.

John Chard
Vision not fully realised, but still a template of sorts.

It could never have lived up to the hype back in 1989, it was hailed as the film to rival the impact of "Jaws" & "Star Wars" as regards historical cinema conventions, it was, we were led to believe, a new age in cinema, or so it seemed. As it was, the film went down a treat for the modern cinema going audience, it raked in cash galore and spawned a raft of very inferior sequels, even though ultimately critics of the time were less than impressed.

So it makes for something of an interesting experience viewing it again as each decade passes. More so in light of Christopher Nolan's bank busting "Dark Knight" series of films. I remember the hype and marketing campaign (T-Shirts and toys bonanza) that ensured that the film could never live up to the gargantuan hype, and I'm honest enough to say that I was a little underwhelmed on first viewing. Yet time has been very kind to it, now showing that Burton had the nous and foresight to reignite a genre without going purely for kiddie like appeasements.

Visually the film still stands up with the best that today's genre pieces can offer, the sets are incredible, with Anton Furst rightly winning the big award for his work here, whilst Burton's dark and deep tone captures the essence of Gotham City and Bruce Wayne's troubled mind perfectly, but does the cast fully realise the potential on offer?. Michael Keaton as the troubled and vengeful Bruce Wayne, is a fine actor and it would only be in time where his take on Wayne the man would be appreciated, as the caped crusader he is outstanding and he set the bar high for all those that followed him.

Jack Nicholson has the time of his life camping it up as The Joker, and he steals the film for sure. This is not because he is acting with great poise and class, but purely because in a film calling for the battle of two unhinged characters, he is the one awash in colour and overacting the maniacal side of the character to the max. Kim Basinger looks great but doesn't have to do much as Vicki Vale except say her lines right, pout, look scared when required and scream with conviction, and she does all of these. But really any other actress could have done the same thing - though I'm personally relieved that Sean Young dropped out of the film and thus allowed some other actress to step in.

The supporting cast do OK, and the soundtrack by Prince pushes the boundaries of annoying caricature indulgence. Ultimately it's a fun ride, respectful of the source material and giving the comic book genre of fil a shot in the arm. Yet you can't help feeling that there is some great Burton vision here that never got fully realised. And that is a damn shame, and something that Burton himself would come to admit down the line. 8/10

Albert
This movie is so bad I couldn't even finish it.

Tim Burton's "Batman" (1989) is _so_ disappointing! Yeah, the costumes, sets, cast, cinematography and music are great, but the story is unrealistic, goofy and, worst of all, dull; in other words, it siphoned! Tim Burton is outstanding with visuals, but he failed to incorporate an interesting story. What good is a BORING film that looks great and doesn't take its subject seriously? This is a quintessential example of style over substance.

Most of the high ratings are from people who saw it when they were kids and they're just nostalgic. If they viewed the film objectively as an adult, with respect to the true Batman of the silver/bronze/modern age of comics, they'd have to admit that it's not a good interpretation.

Sure, it could be accepted as a sort of an ALTERNATIVE Batman; a friend of mine who's in the comic business said this was the only way he could appreciate it. But if you want to see a serious Batman flick, true to the legend of the Dark Knight, catch "Batman Begins" (2005) and its sequels, they blow this overrated soporific dud out of the water.

The movie's overlong at 2 hours, 6 minutes.