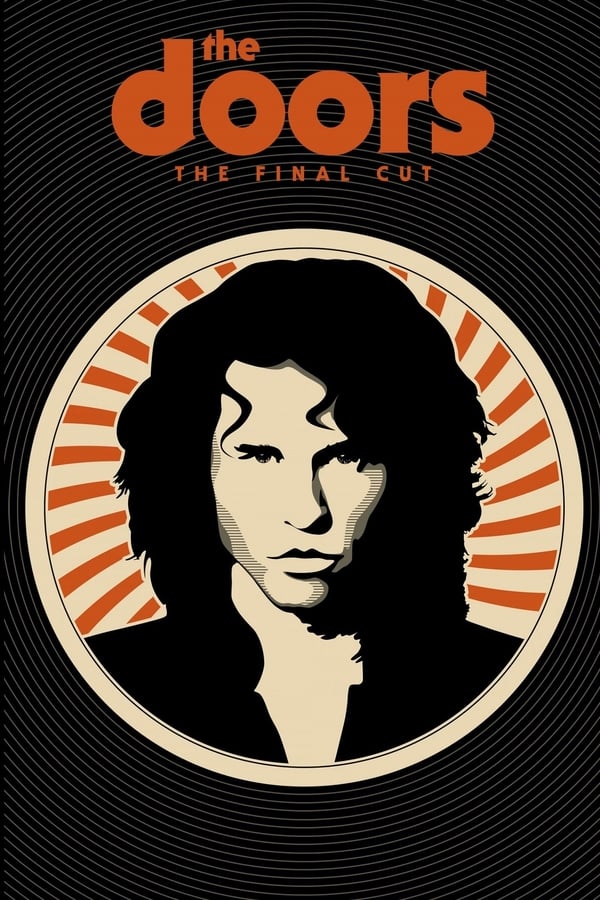 
The story of the famous and influential 1960s rock band and its lead singer and composer, Jim Morrison.

- Movie director Oliver Stone can be seen at 9 minutes into the film, playing the part of the movie teacher.

The Doors of Perception
By Jack Anderson

7
This movie tells the classic story of a famous rock band going from nothing to fame and then straight to corruption and ultimately death. The name of the band? The Doors. My all-time favorite music band.

MUSIC
What I love about this film is that is it is simply filled with music from The Doors. It's non-stop and I like it. Obviously, some could say that it gives a kind of clip-like downside to the film. Not me.

COMPLEX
The film is technically extremely complex and I am always amazed by the work from filmmaker Oliver Stone each time I rewatch it. There are many complex shots and special effects. I remember Stone saying in an interview that The Doors was his most complex film in terms of SFX. This might sound very ironic for a film about a rock band.

MYSTIC
But that's why The Doors is not a biopic movie like any other. It has a powerful theme and tries to go into the mystic.

JIM
The main question about the film is, is it accurate? Well, I am above that. I think that movies must tell a story and don't need to tell the precise events to tell it. That is why I love Amadeus. Taking a real story to say something real about a myth, but telling it as you want in order to convey that message. Not an easy task and I think that Oliver Stone succeeded.
Of course, the film focuses most of its attention to the wild side of Jim Morrison, but if you look closer, you can also see the very delicate side of the artist.

talisencrw
I KNOW I'm giving way too many stars for this, but I don't care; The Doors were one of my very first favourite groups. I fondly recall, when I was 11, and Elektra Records released 'The Doors' Greatest Hits', and the album-length version of 'Light My Fire' was played all the time on the radio, and I was mesmerized by the instrumental middle of the song, got the album from my parents for Christmas, and started a lifelong love affair with the band. Yes, Jim Morrison is highly overrated. Yes, the movie is an extremely self-indulgent mess and it can be quite incoherent and incohesive. But the Sixties, the L.A. rock scene back then, and especially Morrison's life, were just like that, so it is oh so fitting!

I adore the fact that it was Oliver Stone's labour of love (one of thankfully many) and that the surviving members of the band basically had full input. I would take this and 'Talk Radio' (my personal favourite Stone's throw) over a hundred of Stone's politically over-the-top movies any day!

When I was 17, I took my life savings and visited, on my own, nine European countries, including France and its capital, Paris. Did I go for the Eiffel Tower, wild romance on Richard Linklater-esque trains, or its outstanding magic and sidewalk cafes? No--train-wise I had to put up with a stupid labour strike, such that an overnight sleeper car from Berne, Switzerland to Paris had to be switched, in the middle of the night, FOUR times, just so they could prove a point. And it was just to see Morrison's grave. I met 20 fantastic people who had made the pilgrimage from all over the world, and it was my first time having red wine and smoking pot. The graffiti and the sculpture of him, in the Pere Lachaise cemetery, were fascinating, as was his life. Would I go through that again? Of course I would.

It's Val Kilmer's best work by a mile. The film just oozes charisma and breathes life--just as the band's work must have done back in the day. Worth a purchase and re-watches (I watch it each year on Jim's birthday and accidentally bought it twice), for any fan of 60's music or its culture. A bonafide classic when Stone was actually really something.

Wuchak
A hypnotic film, but it emphasizes the negative side of Jim Morrison and is filled with fabrications.

RELEASED IN 1991 and directed by Oliver Stone, “The Doors” chronicles the Southern California band The Doors and their rise and fall between 1966-1971. The film focuses on charismatic singer Jim Morrison (Val Kilmer) who falls into alcoholism and drug-addiction. He flew to France in March, 1971, to join his girlfriend, Pamela Courson (Meg Ryan), and pursue a different career, but died the next summer due to his ongoing substance abuse. The other band members are played by Kyle MacLachlan (Ray Manzarek), Frank Whaley (Robby Krieger) and Kevin Dillon (John Densmore).

I'm not old enough to remember The Doors. The first time I heard of them was when my older brother asked me if I knew of them. I busted out laughing saying, "The Doors? Why don't they just call themselves The Window Sills." Yeah, I thought the name was pretty lame until I discovered Morrison's reasoning behind it:

Another thing that won my respect was their song that was used in the opening of “Apocalypse Now,” which is my all-time favorite film (the original version, not "Redux"). After that I bought their "Best Of" album and my impression was that their sound was horribly dated, even THEN. Over time, however, I've come to respect The Doors' music because it's so unique. They don't sound like anyone else. They have a weird, moody vibe, even their 'hits,’ augmented by a strange carnival feel. Over top of it all is Morrison's commanding and haunting vox. I prefer their more artistic songs like "Riders on the Storm" and "The End" as opposed to their 'hits,' but who can deny the catchiness of "Light My Fire" or the goofy charm of "People are Strange"?

The film focuses on Jim Morrison and leaves the viewer with the impression that he was a miserable artistic-genius type who had no sense of moderation; he sought to escape his personal struggle through loose sex, substance misuse and rock 'n' roll. His excessive self-abuse eventually spilled over to those closest to him and ultimately landed him in a premature grave. His body lies in Paris, a mecca to his fans who have spray-painted the surrounding monuments with gaudy graffiti, some of it profane. The image this leaves you with is that Jim Morrison is no fun to be around, even in death.

So “The Doors” is pretty much the ultimate story of sex, drugs and rock 'n' roll. Stone said he based his view of Morrison, as depicted in the film, on 160 transcripts of people that actually knew him or were around him and the band. From these documents emerged a central truth about Morrison's final years, an image of wild excess. Because of this, I was left with a bad impression of the man. I felt Morrison was a spaced-out, immature jerk, abusive to both himself and others, foolishly sacrificing his life and talents on the altar of alcohol & drug idolatry.

Yet this was only part of the truth. Thankfully the 37-minute documentary on the 'extras' disc, "The Road to Excess" (1997), balances things out. One of Morrison's sweethearts, wiccan Patricia Kennealy (played by Kathleen Quinlan in the movie), the guitarist and another guy offer the other side of the story. They properly point out that Stone's film only shows Jim's 'wild & crazy' side, emphasizing that the events depicted in the picture, while sometimes true, aren't "all that happened." They unanimously describe Morrison as genuine, innocent, shy, loving and gallant, an amazing person who made those around him feel important, as if he was their best friend. Robby even states that Jim was "the most influential person I've ever met."

In addition, the documentary features numerous clips of Morrison himself, clearly showing him to be a fun-loving, nice and sane person rather than the spaced-out, abuse-driven dude shown in the film. Needless to say, the documentary helps round-out one's image of the man.

BOTTOM LINE: Val Kilmer doesn't just play Jim Morrison, he IS Jim Morrison. This is no small feat and vital to the film in light of the fact that he appears in practically every frame. He should have won an award. In any case, if you're in the mood for something that captures that late-60s counter-culture vibe “The Doors” is worth checking out, but it tends to exaggerate things in the name of mythmaking, which is usually the case with movies. For instance, Jim never lit up a closet door with Pamela locked inside (rolling my eyes), the idiotic Thanksgiving dinner sequence never happened and the naked revelries at concerts (and the bonfire) are overblown fabrications. Still, the movie’s mesmerizing in a spaced-out way and highlighted by The Doors' music throughout.

Unfortunately, the first half is superior to the second half, which becomes too unpleasant, offering a very limited and unflattering impression of Morrison. That's why it's essential to also watch "The Road to Excess" on the bonus disc or, better yet, the excellent 2009 documentary “The Doors: When You’re a Stranger,” which exclusively uses footage and photos from 1966-1971. Another problem with Stone’s movie is that it loses its dramatic pull in the second half in preference for hypnotic yet chaotic visual mayhem, not to mention outright lies.

Lastly, in “The Road to Excess” Oliver Stone makes a couple of really asinine statements. Commenting on Morrison, he states: "To live life intensely and well and die young and achieve everlasting fame & glory is the greatest. It's Achilles, it's Alexander, it's... Jim Morrison." Huh? Another dubious line is: "The road to excess leads to the palace of wisdom." Is he on drugs? Jim's road of excess led straight to an early grave, not enlightenment.

GRADE: C (but the "The Road to Excess" documentary gets an A-/B+)

Bazzjazz
Not enough credit is actually given to this great piece of filmmaking.
Oliver Stone at his finest, some acting performances of the highest degree. Kilmer is supberb as Jim Morrison. Arguably Meg Ryan's best performance. Great cameo's in the movie too.Including Billy Idol. Kyle MacLachlan is great too as Ray Manzarek , Michael Madsen also appears.
I loved the show.