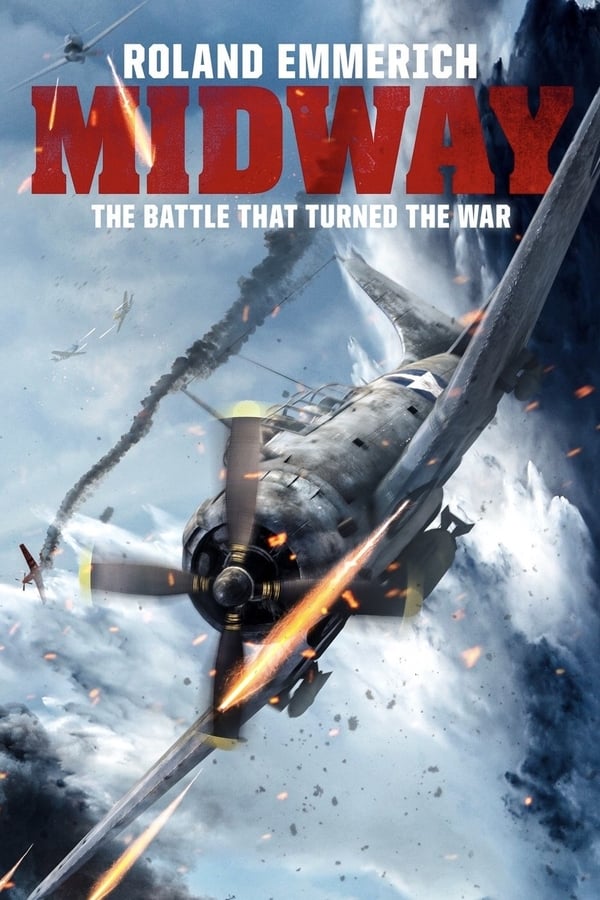 With all due respect to Roland Emmerich and to his fantastic Independence Day, his movies never quite reach their potential, ending up in constant disappointments. It doesn't matter if he has excellent casts or amazing VFX teams, his films' screenplays are almost always stuffed with narrative issues. Midway is simply another installment in his saga of letdowns. Without knowing the director, anyone who looks at this movie will feel instantly captivated. From the unbelievably talented cast to the impressive visuals, it has two attention-grabber ingredients, which can result in a remarkable film… only if the two pillars of any cinematic production are decent enough: story and characters.

These are the main issue with Emmerich's movies. His characters are not compelling or intriguing enough, and his screenplays lack creativity and excitement (whether these are written by him or someone else). When I noticed that Midway had such an acclaimed cast and that it was about the Battle of Midway, I immediately got excited. War epics are a genre that I sincerely appreciate. However, when I checked who was "running the show", I instantly lowered my expectations. Honestly, it's exactly what I expected it to be: visually gripping, but emotionally hollow.

I don't want to understate it. The CGI work in this film is jaw-dropping. The actual war is riveting with astonishing aerial sequences and powerful sound design. Even at a regular screening with the usual 7.1 Dolby surround speakers, the floor was rumbling with the explosions and the planes. This is why I think audiences will definitely enjoy this movie. Maybe not a vast majority, but surely most people will leave their theaters feeling it was good entertainment. It has a long runtime, and it's hard to get through the exposition-heavy story, but in the end, I bet the general public will appreciate the war action enough to give the whole thing a thumbs up.

Nevertheless, it's still a very superficial flick. While it's very respectful to everyone who fought in the war (including the Japanese) and to the historic event on itself, it lacks emotional attachment to its characters. Dunkirk was praised by both critics and audiences all around the world, but its main criticism connects to what I just wrote. Christopher Nolan's film also didn't have any compelling characters. However, there's a big difference between these two movies. Both their marketing and their ultimate goal are distinct. Dunkirk was all about showing the actual war. It never marketed itself as a character-study or that it would even have a significant focus on some of the heroes that fought there. Nolan repeated several times: it's about the war and the war only.

It's genuinely one of the best, if not the best, *pure* war film I've ever seen. When it comes to depicting the claustrophobic, unbreathable, restless, bloody, loud event that a devastating war is, Dunkirk is so realistic it can even become uncomfortable with just sitting in your chair (at least, I did in IMAX). On the other hand, Midway's marketing was about paying homage to "people who fought in the Battle of Midway". Hence the stellar cast compared to Nolan's just competent actors (with obvious exceptions like Mark Rylance or Tom Hardy). It spends most of its screentime trying to develop the actual people that helped win that battle, not with the action itself. Therefore, these characters need engaging scripts and emotionally resonant arcs.

Wes Tooke delivers a screenplay packed with so much exposition that a lot of it looks clearly unrealistic. Characters discuss specific topics that don't make any sense of being in a conversation at a particular time and place. Throughout the runtime, there are dialogue sequences with the sole purpose of explicitly telling the audience what we need to know to understand the story, which ends up turning the narrative confusing, convoluted, and lacking faster pacing. It's tough to get through the non-action periods, and I can't even imagine how dull it would be without such an impeccable cast. Ed Skrein remarkably portrays Dick Best, the only character who's genuinely compelling and carries a complete, well-developed arc.

Unfortunately, I didn't feel invested in any other character. Only the best movies of every year can have a numerous and talented cast while giving each and every actor an exciting role. Midway has too many characters for the story it wants to tell. In addition to this, it has to stretch its runtime because you can't get Woody Harrelson or Dennis Quaid playing secondary roles and not giving them more than just a couple of lines. As time goes by, Emmerich's storytelling structure gets needlessly more and more complicated to follow. It's yet another film added to the "wasted potential" list…

Potential due to how truly magnificent the action sequences can be. It's undeniable that these are entertaining, gripping, and exciting. The dive bombers' scenes are packed with so much tension that I was getting more and more frustrated every time they missed their target, and a bomb went into the sea. I wanted them to succeed so bad, and this feeling can only be triggered by something extraordinary. Midway's war is as close to epic as it could be, but as with every other cinematic production, if its story and its characters are not up to par with the action, there are no outstanding VFX that can save a lousy screenplay.

All in all, Midway is a respectful homage to the people who fought in the Battle of Midway, but it fails to deliver an engaging story with compelling characters. With more characters that what it needed, the runtime is stretched beyond its limit due to the numerous acclaimed actors who would never be in a movie if they didn't have more than a couple of lines. Roland Emmerich has to thank his VFX team for presenting the closest war action we could ever get of the famous battle. Truly epic visuals with tense and riveting aerial sequences, plus a powerful sound design, get your teeth biting the nails. Unfortunately, except for Ed Skrein's character, I didn't feel invested enough to appreciate the non-action moments due to the confusing, convoluted, and exposition-heavy narrative. It's a shame that a visually impressive film possesses such an emotionally dull story. However, I still recommend it for anyone who enjoys war epics and "based on a true story" adaptations.

PS: it doesn’t hurt to research a bit about the Battle of Midway. I didn’t and I’m sort of regretting that now. Don’t make the same mistake. Going in with basic knowledge of what, how, and why it happened will only help you enjoy this movie more.

Intelligence officer Edwin Layton (Patrick Wilson) warns that a Japanese attack is imminent, but his advice is disregarded and the Japanese use their carrier fleet to attack Pearl Harbor on December 7, 1941. Admiral Chester Nimitz (Woody Harrelson) swiftly assumes command of the heavily weakened US Pacific Fleet. After the Doolittle air raid on Tokyo & Honshu 4.5 months later, events lead up to the Battle of Midway on June 4–7, 1942. Ed Skrein plays cocky pilot Dick Best while Dennis Quaid is on hand as carrier commander William "Bull" Halsey.

"Midway" (2019) tackles the Battle of Midway and events leading up to it without throwing in a dramatic fictional story, like the love triangle of “Pearl Harbor” (2001). While I loved “Pearl Harbor” and proudly stand by it, “Midway” chooses to stick to the facts and is thrilling from beginning to end. The main cast members are all real-life figures and there’s a tribute to each at the close.

This is superior to the 1976 movie because Roland Emmerich had the CGI technology to pull off the battle scenes which take place in & above the Pacific Ocean near the atoll of Midway, which is located a little over a thousand miles west of Hawaii. The flick successfully takes the viewer right into the midst of the fight on the water, in the air and under the water. It’s exciting, horrific and revelatory.