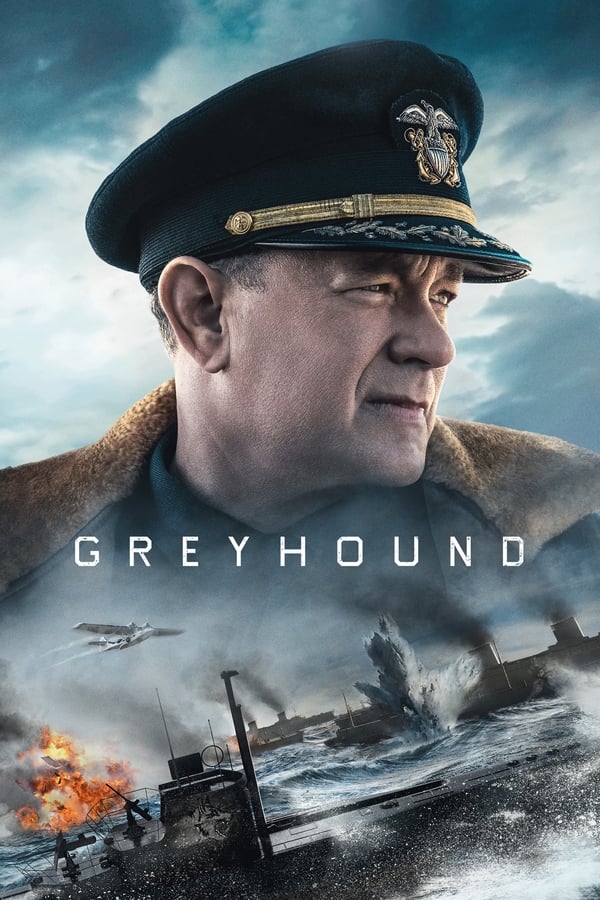 
A first-time captain leads a convoy of allied ships carrying thousands of soldiers across the treacherous waters of the “Black Pit” to the front lines of WW2. With no air cover protection for 5 days, the captain and his convoy must battle the surrounding enemy Nazi U-boats in order to give the allies a chance to win the war.

The only thing more dangerous than the front lines was the fight to get there.

Spectacle with no story
By Jack Anderson

5
Greyhound is a very odd movie. When the end credits start rolling, you do not feel like you went through a cathartic moment. The movie is not bad and is quite entertaining. But it feels like watching a Disney World spectacle. You ate your popcorn and liked what you saw, but you did not really have a story with a beginning, a middle and an end.

Don't get me wrong, the special effects were terrific and having to face an invisible enemy was pure fun! The Nazi howling at night was quite a memorable scene. But the movie failed where Christopher Nolan's Dunkirk shined. You don't get a full story. You just see lots of boat fights, and that was it.

VERDICT
I give it 5 out of 10. A fun spectacle with no story.

I love war movies, especially when they're able to depict the action in such an immersive way that the viewers really feel like they're there. In my opinion, it's the genre that most requires a technically outstanding production quality. The visual effects need to be absolutely perfect. The cinematography must capture the intensity of the battlefield. The sound design has to be incredibly powerful. Finally, a war film requires the most epic, nail-biting, chill-inducing score so the audience can actually feel the unbelievable atmosphere that this genre usually possesses. Greyhound has one of the greatest actors of all-time as its protagonist, but does it check the points mentioned above?

Yes and no. Technically, this movie barely has any issues. The VFX look utterly stunning, no doubt about it. Shelly Jackson, the cinematographer, has one of the most challenging tasks a filmmaker can have: filming in a water environment. He deals with this problem surprisingly well, by allowing the viewers to fully understand everything that's going on for the entire runtime. The score (Blake Neely) is emotionally powerful, but I believe it could have elevated a lot more action sequences than it actually does. The editing (Mark Czyzewski, Sidney Wolinsky) is excellent as well.

So, what failed? Well, I will always defend that the two pillars of any film are its story and characters. Without one of these two, very few movies can survive. Without the two, no film can. I have to use Dunkirk as an example here. Christopher Nolan spent the whole marketing campaign saying that his movie was about the depiction of an actual war. About how it felt to actually be in one. Therefore, Dunkirk barely has any sort of character development… because not only it never intended to, but it doesn't need it to accomplish its goal.

However, its storytelling follows a distinct method that allows for some exhilarating moments in the air, ground, and sea. Its action sequences are so powerful and incredibly realistic that I consider it the most immersive war experience I have ever experienced. Thus, the lack of compelling characters didn't really bother me because I was there to try to feel what it's like to be in a war. Greyhound also doesn't have one single character who's well-developed or well-explored. They all seem to have names, and that's it. Tom Hanks is obviously impressive in his acting role…

But his skills as a screenwriter definitely need to improve. Like I insinuate above, there's no problem in having depthless characters, as long as the story and, in this case, the action, work. None do. I'm not lying when I write that 90%+ of the script is Hanks yelling "turn right", "hard left", "slow down", and hundreds of other types of direction guidelines in nautical language. The action is lackluster. Basically, the whole film is a repetitive, tiresome cycle of a U-boat showing up on the radar, Hanks looking through several windows shouting the same nautical stuff to his crew, and trying to eliminate the enemy's ships.

I could feel the suspense and the tension that Hanks' ship emanated. I love the first encounter and pursuit of the first U-boat, it's exceptionally filmed and quite riveting. But from this moment on, it's just the same sequence stuck on repeat mode until no more ships exist. So, even though the set pieces look marvelous, these scenes quickly lose impact. Aaron Schneider should have found a way of elevating Hanks' screenplay, but unfortunately, he can only do so much. By the end, I'm left with a character whose name I can barely remember (honestly, I needed two full minutes to remember the protagonist's name after the movie ended).

All in all, Greyhound could have easily ended up as a small-scale Dunkirk. Technically, it has everything it needs to be a brilliant war flick: beautiful visual effects, powerful sound design, impeccable cinematography, and an epic score. Disregarding one of the two pillars of filmmaking (story and characters) is only an issue if the other also doesn't work. The lack of any character development can be perfectly compensated in a war film, as long as the method of storytelling allows for a unique experience packed with realistic and immersive action. However, Aaron Schneider's movie doesn't possess a compelling story, and the action set pieces are stuck in a dull cycle of hunting U-boats in the exact same way throughout the whole film. The first sequence is packed with tension and suspense, but from that moment on, the entertainment levels drop drastically. Tom Hanks is fantastic as the protagonist, but his screenplay is far from truly being one. All dialogues revolve around characters (mostly Hanks's) calling nautical instructions for most of the runtime and looking either through a window or binoculars. In the end, it's underwhelming and disappointing, but I still recommend it to the war genre's aficionados.

Tom Hanks is a Captain of a destroyer taking on the u-boat menace. He's fearless, god fearing, modest and faces down hordes of u-boats who are out to get him.

The enemy goads him, sends u-boats to face off with destroyers in 18th century style exchanges and sails around on the surface following his floatilla, in open defiance.


Now for an injection of reality. U-boats did not take on destroyers in surface battles of the kind you see in this film. They did not goad their captains (and records show they took no pleasure in the job they did) nor did they let the destroyer know they were there. This is a fiction and a rather silly one at that. U-boats were not a match for a destroyer, in any sense and made every effort to evade them.

The US in the early days of this war, were hopelessly outclassed by u-boat packs. It took considerable time before they started defending merchant shipping. Their admirality mostly declined advice and help from their more experienced, British counterparts. This predictably made the situation a lot worse. Eventually they did catch up but only after suffering massive losses.

This film is, in short, a fiction. Its entertaining, its well acted, I do like Tom Hanks and the action scenes whilst in many instances ridiculous, are well rendered and frenetic.

So by all means watch Greyhound for pure entertainment but don't expect a "Das Boot" experience by any means. Its worth mentioning too that even Das Boot was not 100% correct but a lot closer to the truth than this film could ever hope to be.