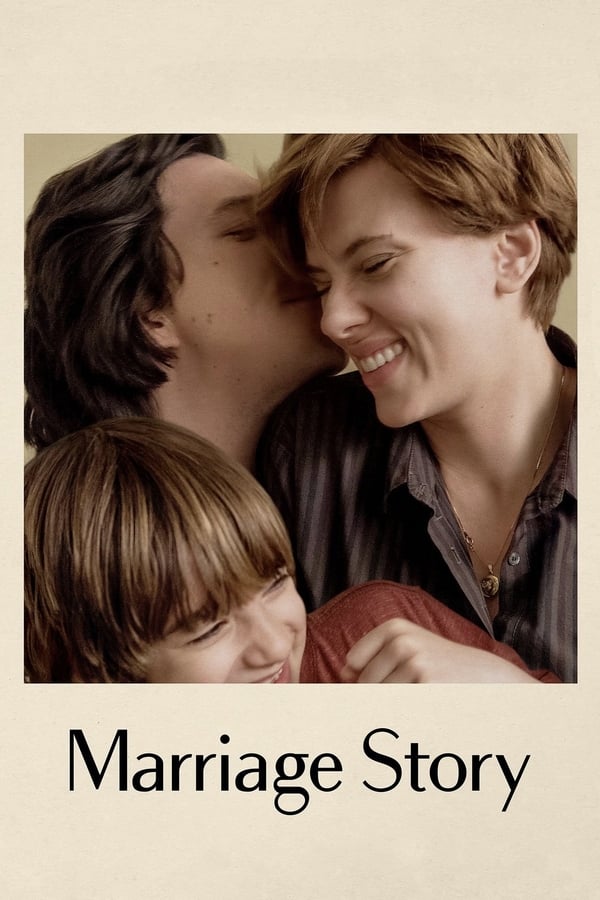 
A stage director and an actor struggle through a grueling, coast-to-coast divorce that pushes them to their personal extremes.

BARBER vs. BARBER
By Jack Anderson

8
TRUE
Shot on 35 millimeter film, Marriage Story feels true from the very first shot. After having watched quite a few films that I did not particularly like, watching Marriage Story feels like a breath of fresh air so cold I can truly feel it. The images are crisp but with the beauty of film (go away, you digitized world).

THE STORY OF... A DIVORCE
Marriage Story actually tells the story of... a divorce. And I have seen many films, but don't remember a movie that so eloquently depicted the beautifully disgusting reality of divorce since Kramver vs. Kramer.

KRAMER vs. KRAMER
In many ways, Marriage Story walks into the footsteps from Kramer vs. Kramer, but from both angles of the story. In Kramer vs. Kramer, we mostly focus on the relationship of the father and the son. Here, we get exactly both sides.

SCRIPT
The script is truly remarkable and very clever.

THE BEAUTY BEHIND THE BEAUTY
Scarlett Johansson is so beautiful that we sometimes fail to grasp how talented she can be. Watching her in Marvel movies is as painful as watching a great old bottle of wine but not being able to taste it. Obviously, I'm talking artistically.
Scarlett Johansson is just wonderful. Physically, she has, in this film, short hair and dresses very poorly, which actually removes the shiny about her and lets truly see her. And she is even more beautiful because she is true. She is.
There is a beautifully amazing scene in which she meets her lawyer (Laura Dern) for the very first time. The camera simply focuses on her and... rolling! We move from emotions to others then back to other emotions. She's such a talented actress.

ADAM DRIVER
Adam Driver is also a great actor. He has this kind of freaky expressionless attitude which is magic. And he did also a wonderful job in this film.

LAURA DERN
Laura Dern is simply exquisite as the bitch lawyer. I am sure she had great fun playing that role.

RAY LIOTTA
When I saw that Ray Liotta was playing in this film, I was slightly concerned. And oh boy, was I wrong! He played just perfectly the dirt.

ALAN ALDA
And what about Alan Alda, as superb as ever? I just loved his character too.

VERDICT
This review is very poor and I really do apologize for it. I don't have the energy to go through the review Marriage Story deserves. And I promise you one day I will come back from the future and will write a completely new and good review, perhaps utilizing the same format as the two letters that both lead characters write to each other.
I give it 8 out of 10. Superb.

SWITCH.
I wish so badly I could separate the art from the artist, and this is the only reason I cannot give ‘Marriage Story’ the five stars it actually deserves. My own issues with Baumbach aside, however, and it’s shocking to me that a film so simple can be so nearly flawless (I mean this technically too; the film is shot, edited, paced and scored beautifully). Despite how much I cried, it finds beauty and comedy in the tiniest of moments. It’s an ugly portrait of two flawed people and therefore never easy to watch, but it is one of the most rewarding experiences I have had with a film in years. I just hope I never have to experience it myself.
- Ashley Teresa

I don't even know how to start this review… Marriage Story is one of those movies that stays with me long after I've finished it. I've been thinking about it a lot, and it's undoubtedly one of the most realistic dramas I've ever seen. That's due to the award-worthy performances of Adam Driver (Charlie Barber) and Scarlett Johansson (Nicole Barber), but also because of Noah Baumbach's incredibly layered screenplay. In addition to this, Baumbach is undeniably one of the best directors of the year. With the help of his DP, Robbie Ryan, he sets the platform for Driver and Johansson to shine as the astonishing actors that they are.

Some people watch films to forget their daily issues. Some just want to have fun. Some want to learn more about a particular true story. However, there's not a single person alive who wants to watch a movie and not be able to leave the theater (or, in this case, their couch) entertained. Marriage Story has such an emotionally complicated premise that it's tough to convince people to sit and watch. I mean, who wants to watch a divorce develop throughout more than two hours? Who wants to watch two people who were once in love with each other become the worst of themselves? Yelling, fighting, court, custody, lawyers… It's not exactly an attention-grabber.

I imagine people who went through the same situation getting triggered and remember a phase of their lives that was probably one of their worst. I'm writing this because I've seen some negativity towards people who simply don't want to watch Baumbach's depiction of a depressing event. It's perfectly understandable if anyone decides to skip this one, especially if it hits too close to home. In my case, I've never gone through a divorce (hopefully, I'll never will), and usually I can "enjoy" this type of sad, frustrating, bittersweet films (Manchester by the Sea, A Ghost Story) for what they are, no matter how tragic.

If I had to choose one-word praise: realistic. There's no way around it. The palpable emotions are the main reason why this story works so well. Only people who have never been in a relationship of any kind can't understand the moment when a fight starts to escalate, and the couple begins to say terrible stuff at each other that they don't exactly mean. The exaggeration and over-the-top arguments are part of every couple's life. They can occur due to a hundred reasons related to stress, work, accumulation of little things, or simply because it's just not a good day.

Marriage Story doesn’t deliver a hopeful message or a sweet story because that’s not what divorces are. It’s not difficult to imagine how hard it is to separate yourself from the person you love(d) for years without end, even more when there’s a kid involved in the process. Baumbach could have followed the genre cliches and provide moments of pure happiness, but that’s not something that happens during a situation like this. It’s a heart-wrenching phase to live through, and I believe that this movie is going to be thoroughly analyzed in film school in the next decade or so.

THE scene with Driver and Johansson going at each other exponentially harder and heavier criticism-wise is one of the most emotionally powerful dialogues of the millennium. The raw emotion and the physical movements that both actors can bring into the fight are absurdly impressive. Their chemistry is so inexplicably real. I never, not even for a single second, thought that I was watching fictional characters. Nicole and Charlie can very well be our neighbors or part of our family. Baumbach's use of long takes really elevate every single sequence, allowing the protagonists to move around the set and actually act.

Technically, there's no better acting this year than what Driver and Johansson deliver. Both are always moving and doing a lot of things while giving their lines. Making dinner, drinking tea, going to the bathroom, chopping a carrot, blowing their nose, standing up, sitting down, walking around the room, crying, smiling, laughing… All of this in a single take! Several times!! Scarlett shows more emotion throughout the runtime than her counterpart, but Adam proves why he's the frontrunner at the 2019's Oscars. His restraint when Charlie is trying to be polite even though he's mad, or his explosive behavior when his character decides to finally let go (excellent build-up), are some of the attributes that make his performance my favorite of the year.

Not trying to diminish Johansson's display. Both deliver career-best performances, in my opinion. Both deserve every award that exists. The supporting cast is also impeccable, and I know that Laura Dern (Nora Fanshaw) is probably going to be nominated. Still, the two leads are so engaging and captivating that I couldn't be impressed with anyone else. The only person to rise to the main actors' level is Noah Baumbach himself. With the best screenplay of 2019, he offers the audience an incredibly complex story, filled with subtle details and exceptional dialogue.

He controls the movie's pacing beautifully, and he knows the right moments to insert a little joke to lighten up the dark, depressing mood. My only issue with the film has to do with its replay value. We all have been through this situation: watching a fantastic movie, only once, and never again. Marriage Story is going to be one of those films for me. I love everything about it, but I know the chances of a rewatch are very, very small. It's a profoundly unsettling story, super uncomfortable at times, and I really don't want to go through the sadness and frustration all over again.

All in all, Noah Baumbach delivers what I believe to be its career-best flick, Marriage Story. With the best screenplay of 2019, as well as one the best directions, this is the closest the world is ever going to get to a realistic depiction of a divorce. Scarlett Johansson and Adam Driver also give the best performances of their lives, elevating every single scene, dialogue, argument, or joke. The long takes allow them to shine and actually work as actors, moving around the set and doing domestic/job tasks, while delivering their lines. Technically, both Baumbach and the entire cast are absolutely perfect. It's an extremely emotional narrative, very depressing, sad, and even uncomfortable at times, which might scare some people off, especially if they've been through this. Despite its replay value being affected (a rewatch is very unlikely), it's a phenomenal lesson in storytelling that stays with us long after it's finished. Easily, one of the best movies of 2019. Don't miss it, and try not to cry.

Sushrut Bhattacharjee
This movie is a thoroughly humane and sensitive portrayal of the painful process that is "divorce". Noah Baumbach, who himself had a divorce with actress Jennifer Jason Leigh, seems to have drawn from his own life experiences for this film. The characters are all balanced and multilayered; the acting of the leads, specially Johansson and Driver, lend a particular personality to their characters. Everyone plays their role to the perfection, even the supporting cast including Laura Dern, Alan Alda, and the criminally underused Merritt Wever. This movie shows how a process as messy as divorce turns two people who love and respect each other into one wishing death on the other. No, they are not bad people , they are just people under "bad" circumstances, and Marriage story drives that point home. Overall: a brilliant movie, and a great way to end the year.

Star Wars: The Rise of Skywalker
2019