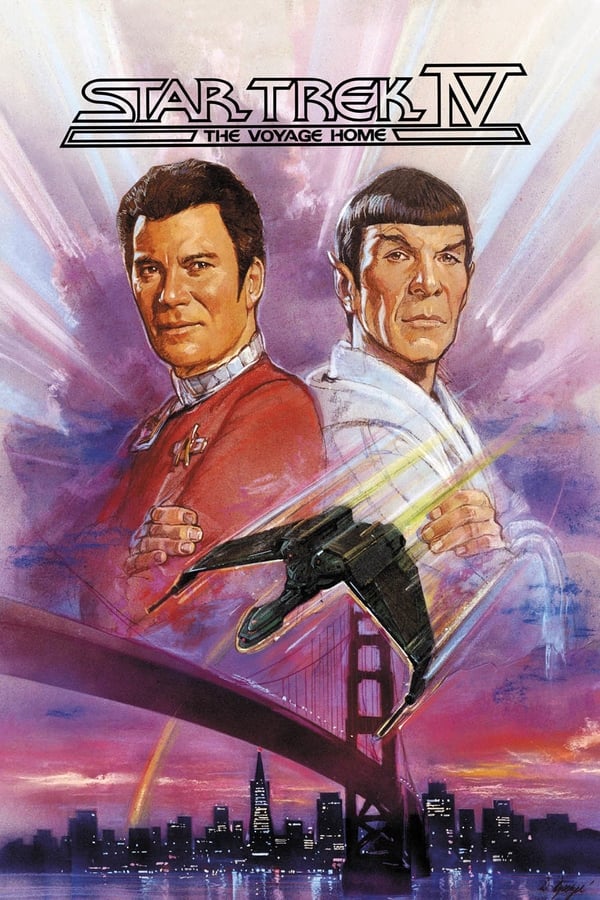 
Fugitives of the Federation for their daring rescue of Spock from the doomed Genesis Planet, Admiral Kirk (William Shatner) and his crew begin their journey home to face justice for their actions. But as they near Earth, they find it at the mercy of a mysterious alien presence whose signals are slowly destroying the planet. In a desperate attempt to answer the call of the probe, Kirk and his crew race back to the late twentieth century. However they soon find the world they once knew to be more alien than anything they've encountered in the far reaches of the galaxy!

The key to saving the future can only be found in the past.

- Leonard Nimoy came up with the idea of using humpback whales after reading a book about extinct animals. Nimoy realized that their song added mystery and their size added a challenge for the crew to overcome. Nimoy previously considered a story about a disease that could only be cured by the rain forests but decided that he wanted to keep the film's tone light-hearted.
- After Star Trek: The Original Series: Tomorrow Is Yesterday (1967), Star Trek: The Original Series: The City on the Edge of Forever (1967) and Star Trek: The Original Series: Assignment: Earth (1968), this is the fourth and final time that Admiral Kirk and Spock visit the United States in the twentieth century.
- Harve Bennett wrote the beginning and the ending of the script while Nicholas Meyer wrote the middle scenes which take place in San Francisco. Steve Meerson and Peter Krikes wrote the original screenplay, and while most of their ideas were deleted, they still receive credit.
- Eddy Murphy was supposed to be cast in the film.

7
MAGIC
Motion pictures is magic. A deeply fragile tiny universe of only two hours where it usually works or it doesn’t. The first Star Trek movie was trying very hard to be. The next installments felt better. Star Trek IV: The Voyage Home feels right and from the very beginning.

CONTINUITY
First, one of the best elements from the beginning of the film is that the continuity is top notch. Every film starts where the previous left off and there is a strong sense of a big screen series. This is particularly relevant when watching it in 2020, an era filled with constant reboots or even reboots of reboots of reboots.

SAN FRANCISCO, 1986
The film cleverly takes us back in time, which actually is for us the present... well now it’s actually the past. Anyway, I just simply loved this simple idea. Many times before, episodes from Star Trek took the Enterprise crew back on Earth, but often at a different era. Here, we are in the present and it feels great. Watching the characters walk in the middle of San Francisco is just pure joy. Not only this, but it could easily have been a very, very bad film. They say that movies are created three times: once during the writing, once during the filming and once during the editing. This script, while great on the screen, could have been really horrible. Spock swimming with whales while wearing a headband?

HILARIOUS
Which brings me to how hilarious this movie is. This was pure gold. Kirk and Spock kicked out of a bus, Spock swimming with a whale, the movie is wildly fun and just a joy to watch. This shows the spectre of Star Trek, that can produce highly elaborated stories such as Star Trek: The Motion Picture (meta story), a classic revenge story (Star Trek II: The Wrath of Kahn), a rescue mission (Star Trek III: The Search for Spock) and now a time travel story. The franchise compared often to Star Wars may not have the same level of drama, but it can go in areas that Star Wars could not even engage. I just highly appreciate how the franchise was able to move onto the big screen with a serialized precision.