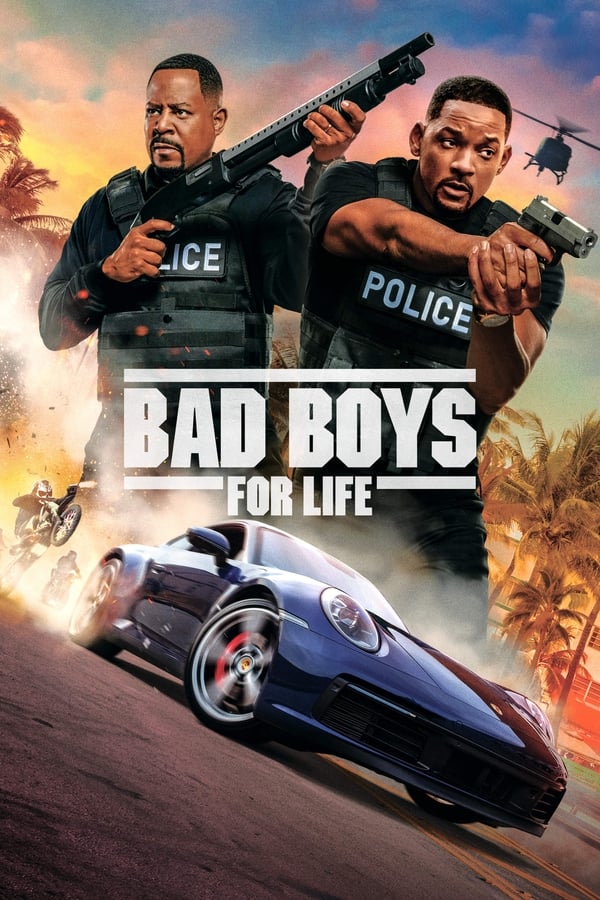 
Marcus and Mike are forced to confront new threats, career changes, and midlife crises as they join the newly created elite team AMMO of the Miami police department to take down the ruthless Armando Armas, the vicious leader of a Miami drug cartel.

SWITCH.
The list of what's wrong with 'Bad Boys For Life' is long and varied, but it's not all bad. There were some good lines, and the scenes where Mike and Marcus were together obviously shine in an otherwise dull film. Fans will also go nuts when a character from a previous 'Bad Boys' film makes a return cameo appearance. Look - 'Bad Boys 2' was one of those rare films where the sequel was better than the original, so there were a lot of high hopes riding on #3, especially given the exceptionally long period between drinks. But I'm afraid all those expectations have been crushed, and what's left is a mediocre offering that will go down as the third best 'Bad Boys' film... possibly until 'Bad Boys 4' arrives.
- Jess Fenton

I was never a big fan of the Bad Boys films. Firstly, I'm not too fond of Michael Bay as a director (as a producer, he's fine). The way he directs his action sequences is incredibly choppy, filled with questionable CGI, very hard to follow, and we all know his passion for exploding everything. Oh, and I can't forget about the constant product placement (amazing how in a brutal explosion, everything is destroyed except a gorgeous-looking Audi car that remains intact). Secondly, the storytelling always felt extremely generic and unsurprising. So, obviously, my expectations weren't very high…

Maybe that's why I enjoyed Bad Boys For Life way more than I anticipated. This movie should be a lesson to the Fast and Furious franchise. To make a mindless entertaining action flick, the lighthearted tone has to be well-established from the get-go. Despite the fact that the third act deals with absurd emotional twists worthy of a Mexican soap opera, the screenwriters are able to find just the right amount of harmless fun. I didn't watch a single clip before the film, and ten minutes in, I acknowledged that its goal was to simply be entertaining without taking itself too seriously.

Adil El Arbi and Bilall Fallah balance the more dramatic family issues with the ludicrous action very well. The latter sequences are much better than Bay's. The car chases, even when containing a few too many cuts, are relatively easy to follow, and they pack that necessary adrenaline rush. There are a few surprising shootouts that are filmed to make them look like one take, which definitely brings something pretty uncommon to this kind of formulaic action movies. Technically, I think both directors did an excellent job, especially considering that this was their debut feature film.

However, the story brings everything down. I believe Mexican soap operas might have better scripts. The dialogue reaches such a cringe-worthy level. Every essential plot information is given either through lazy character interactions or by that magical computer that every generic action movie possesses with which the main characters can basically know everything about everyone at the click of a few buttons. The comedy is quite hit-and-miss to me, a lot of the jokes didn't land, but some did make me chuckle. Overall, the screenplay is as cliche as it could be, and that last shot… I hate it. In the end, it's the cast who saves the boring narrative.

Will Smith and Martin Lawrence share fantastic chemistry, and their banter is always entertaining to watch, even if it isn't as hilarious as it could be. I liked Lawrence more than Smith, maybe due to the non-action, family comedy bits that worked seamlessly. Nevertheless, it's dumb fun, and it's plainly visible that the actors had a blast shooting this movie. The whole cast transfer the joy that they had on set to the screen, and it's pretty noticeable. Watching Alexander Ludwig (Dorn) outside Vikings is always a pleasure (I so wish that he gets more important roles in the future), and the whole AMMO team (Vannesa Hudgens, Charles Melton, Paola Nunez) is all compelling enough, even if the characters are two-dimensional.

It's simple: whether you enjoy the Bad Boys saga or not, this is undoubtedly the best installment of the franchise. If you go to the film theater with basic expectations of having fun, Bad Boys For Life gives you that, so I recommend it. It's a pure popcorn-entertainment action flick with recognizable actors who all share great chemistry. With Michael Bay out of the director helm, Adil El Arbi and Bilall Fallah deliver surprisingly good action sequences, considering this is their debut feature film. The formulaic, cliche, soap opera story is straight-up ridiculous at some points, and it carries such an aura of predictability that when it tries to introduce an emotional twist, it merely becomes absurd. The last shot feels like a call to Hollywood to make more sequels, which sort of ruins the whole "Bad Boys one last time" tagline… I'm extremely undecided on which side this review should fall, so I'll base my decision on the answer to the following question: "Am I going to (want to) see this movie again or another sequel?" Honestly… no.

itsogs
Another action packed movie for fans of bad boys.