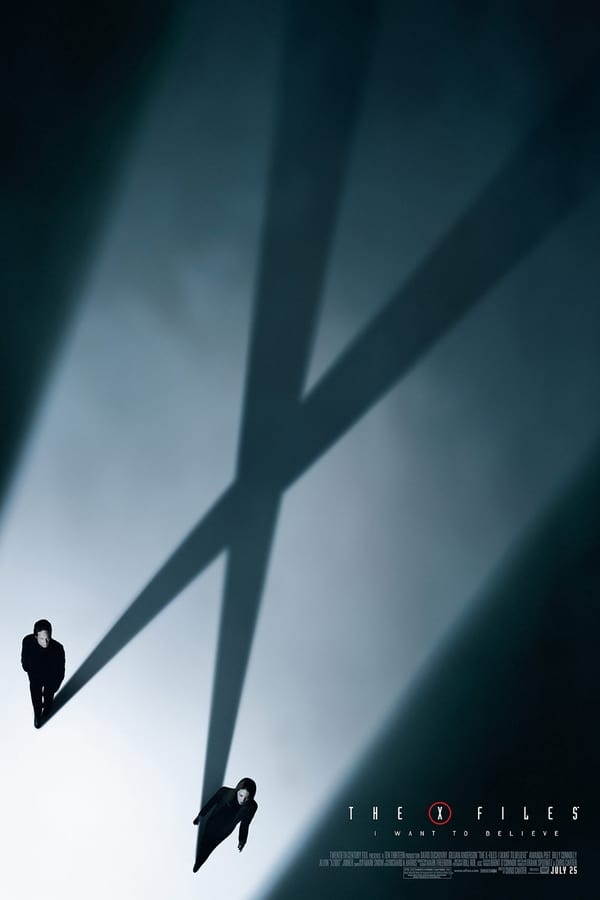 
Six years after the events of The X-Files series finale, former FBI agent Doctor Dana Scully is now a staff physician at Our Lady of Sorrows, a Catholic hospital, and treating a boy named Christian who has Sandhoff disease, a terminal brain condition. FBI agent Drummy arrives to ask Scully’s help in locating Fox Mulder, the fugitive former head of the X-Files division, and says they will call off its manhunt for him if he will help investigate the disappearances of several women, including young FBI agent Monica Banan. Mulder and Scully are called back to duty by the FBI when a former priest claims to be receiving psychic visions pertaining to a kidnapped agent.

To find the truth, you must believe.

- The production name of this film was "Done One" (it was "Blackwood" for the first film).
- Amanda Peet was chosen especially after Carter and Spotnitz saw "Studio 60". There were looking for a character with authority.
- Xzibit won the part after auditionning.

1
I truly think that you can learn much more from an art form by tasting its worse part than its best. For instance, if you read a great book, you will find everything great and will have a sense of closure. Try to reproduce it? It will be damn hard.
But if you stop and read a very bad written book, you will instantly see the things that should have been done differently. This is true in literature, in music and especially in movies.
I am very sad to write that "The X-Files: I Want to Believe" is unfortunately such example of movies to its worse. There are so many bad things in this film that I almost don't want to start, as I have great respect for the cast and crew that worked on this film. But I think a good review is about being honesty. So let's be honest.

This move is awfully bad. Even worse. I have seen thousands of movies, but this is one of the worse movies of my entire life.

Story
The trailer gave the impression that there was a big mystery hidden under the snow. And Father Joe was helping the FBI to find this place. "It's here. It's heeere!", would he repeat. I instantly thought it was a brilliant idea. Imagine my deception were all there was was emptiness.
What was the paranormal element of the story? An what was the story anyway? Do you imagine the audience leaving the movie theater and saying "Oh my, what a great story!"
Meanwhile, I remember when Scully was an intelligent character. In this film, when she is doing researches on Stem-cell research, I just felt very bad for her...

Scary movie
The light was pretty cool, but there was no atmosphere at all during the all film. For months, Chris Carter kept saying "This is a good-old scary movie." Well, I was far more scared during the previews just before the movie than during the 1h40 of TXF2. The only moments that should have been scary are so badly done that it wasn't scary at all. On the contrary, it felt very disturbing, in a pathetic way.

Disturbing
And yes, this film felt very disturbing. For instance, the George W. Joke was simply out of context. We're talking about art, here. Not some random popcorn movie with lame jokes inside of it.
Remember the first seasons? Just compare any episodes from the first 6 seasons with this one... You get the point.
Then, the theology aspect of the movie is just completely bad and also wrong. And I won't say that I found the movie homophobic, but that aspect of the film was also totally dumb.
It was a time when Carter and Spotnitz could talk about disturbing subjects and find those subjects a right place into the mythology of the show.
For instance, in "Paper Clip" and in "Nisei"/"731", they used the Holocaust to tell a science fiction story with aliens and spaceships... It could have easily become something very silly and unappropriate. But they did it in a marvellous way and in the end, in a very powerful and even very emotional way (remember when Scully almost cried in the camp? it was very moving).
Same thing when our friendly bros. wrote "Home", the most disturbing thing I've ever seen on tv (and Kim Manner's favourite episode)! But it was done in a great way too! And there even were some great shipper scenes and humour in it!

On the other hand, we have IWTB, dealing with pedophiles AND homosexuals. The script mixes those two elements and unintentionally implies that one leads to another.

Let's take the "pedophile camp" sequence. The way of filming it and the script made that scene completely grotesque. But, on the other hand, it was something that I'm sure none of us had ever heard. A pedophile camp? Wow! So that's a good point! Something original on which we can have a thinking on it. And it could have been well done. Actually, when I first learned that Billy Connolly's character was a pedophile, I thought it could be a good idea. Not because I enjoy thinking of seeing a pedophile character, but because I thought "Damn! Chris Carter has some balls and will try to write a disturbing story!"
But that first pedophile sequence was done in a very heavy way. There is nothing delicate about it. And it's bad from the very first second. Indeed, Scully is directly putting her morality face. We can understand that she is reticent to see him (and even more if we know that he's a priest and that she's a religious woman). But a simple little strange look on her face would have been far more than enough. Instead, she just jumps on him, telling him that he's a bad guy because he slept with little children. We don't need her to understand that.
Then, a few seconds later, the cheap "philosophy" starts. That's the worst part of it. Nothing was built first.

And it's the exact same thing for the homosexual aspect. We could argue about this, since this is kind of a surprise. But it went completely flat! When you see the woman's hand on the bald russian, you aren't surprised in a good way, like "Wow! I didn't expect that! That's a good plot twist here!". Instead, you just go "What?!" and the more you see, the more dumb it feels.
And again, from that point in the movie, nothing is built about homosexuality either. So you just see the guy crying over his boyfriend during the final experiment and that's it.

So, in the end, I find the writing very immature. Maybe this comes from the time constraint, maybe not. But whatever the reasons were, the result is here, or should I say, is heeeeeere. Everyone can talk about about homosexuality, racism, pedophilia, raping, etc. But if you do, you have to do it in a decent and intelligent way. Whatever it is a horror movie or a comedy. Remember "La Vita È Bella"? Writing a comedy that is taking place in a jewish death camp during WWII... That's not something you can do without having some balls and writing and rewriting and rewriting until you have a really good script.

And I'm not the uptight kind of guy that is offensed by everything. I could even see a movie about Krycek raping Scully (private joke inside). But in the end, it should be done in an intelligent way, not in a bold way like it is the case in IWTB.

This movie tries to do everything and in the end does nothing at all.

Gillian/David
There was one good aspect though. Gillian Anderson is an amazingly talented actress and gives a very good and really intelligent performance. David Duchovny was also very good. They were still Mulder and Scully and that praised chemistry was still there.
Then, I've never liked the acting of Amanda Peet, and this movie isn't an exception.

Billy Connolly
Connolly is a great actor, but not in I Want to Believe. I don't think it's his fault though. His lines were so bad that he had almost no material at all to help him.

For the fans
What does "for the fans" means? If that means throwing plenty of dull references, well, Chris and Frank succeeded it. The is the ninth season syndrom all over again. And I'm afraid to say that, but season 9 was really good, compared to that film. It was as if Chris was thinking "let's putting them into bed and the fans will like it..."

The music
I have nothing to say about the music. There were a few good seconds there, but that was it. Suddenly, I heard a theme from Fight the Future, and I just felt bad because that was a great film! Indeed, when I first saw "Fight the Future" in 1998, I left the movie theater being really exstatic. FTF was PURE GOLD, compared to this one.

In the end, Chris Carter had everything in his hands. A nice budget (yes, 35 millions is really enough), some great actors (Gillian, David, Billy Connolly), the amazing landscapes from Pemberton, and... six years to think about it. I have the feeling that Chris did nothing for 5 years and then wrote a script really quickly because of the WGA strike. This is a shame. And I don't see how this movie will succeed on the box-office.
And I am so disappointed, because Mulder and Scully were back! Duchovny and Anderson were so good together! There were sparks when they were together and it felt so good to see them again. But their characters were just thrown into the emptiness of a very bad script.

Bad story for a beautiful photography
By Gruic

3
A lot of things works very well on this film. The photography of Bill Roe is amazing for a superb spot.
Mark Snow composed a lot of great songs. I love "The trip to DC", very strong. And the ending theme is outstanding.

Sky Captain and the World of Tomorrow
2004