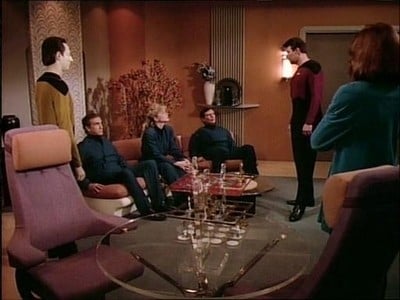 A derelict satellite is found with cryonically frozen humans aboard as the USS Enterprise is sent to investigate the destruction of outposts near Romulan space.

- In the writers and directors' guide for the series, written by Gene Roddenberry prior to the first season, Romulans were covered by one of the main writing rules which stated "No stories about warfare with Klingons and Romulans and no stories with Vulcans. We are determined not to copy ourselves and believe there must be other interesting aliens in a galaxy filled with billions of stars and planets." Following the perceived failure of the Ferengi as the main villains of TNG by the production staff, the Romulans became the main villains during the early years of the series. This was in addition to the Borg, who were originally developed as an insectoid race for this episode but became a race of cyborgs by the time they first appeared in Star Trek: The Next Generation: Q Who (1989).
- This marks the last episode with beardless Riker.

As a work of science fiction, Star Trek is as much about the adventures as it is about imagining how our current human condition can evolve to a better future that needs to be imagined first before it can be realized. It was inevitable then that Star Trek would do an episode where present-day humans find themselves in the utopian 24th century, highlighting how different things are: no poverty, no hunger, any material needs available instantly thanks to technology, self-improvement as the society's goal. The three examples of present-day humans here shine by how provincial they seem: a money-obsessed finance speculator, a booze-and-chicks country music performer, a housewife. A somewhat predictable episode, but very effective. The episode also has a B-story about tensions with the Romulans, doing some necessary world-building and providing some connective tissue between episodes. TNG episodes tend to be very self-contained, although there is some character development that carries over from the past, and this as the final episode of the season is no exception: no cliffhangers here.

Over season 1 there were many changes of writers and producers behind the scenes, and the series was apparently still trying to define itself and distance itself from being a rehash of TOS. Creator Roddenberry's strict adherence to too-perfect characters and lack of interpresonal conflict was apparently unnerving and constraining several writers already in season 1. Overall, of what I've seen of season 1, it still makes for fresh and interesting television in 2018, although some episodes do lack a little additional spark of originality; indeed I cannot imagine seven 26-episode seasons of a show with this format. Some characters are mostly just archetypes (Troi, Dr. Crusher, Tasha); most of the others are well-defined but the more interesting episodes for them are still to come.

The quote:
Riker: "Makes one wonder how our species survived the 21st century."

I love science fiction. But I hate science fiction. To me, there are two types of science fiction. The one with ridiculous and Manichean aliens and the one with real and fascinating science. The one that makes you think and the one that makes you cringe. Independence Day versus 2001: A Space Odyssey. That is the reason why I never watched Star Trek in the first place. I thought it was merely about "bad" science fiction. And I was not fully wrong. Most of the episodes of the first three series (including The Animated Series) are bad. Ridiculous creatures wearing ridiculous outfits, lame storytelling, no character development, you name it. But when the episodes are good, then suddenly the entire show elevates itself and the stories become fascinating.

Star Trek is a saga that you have to work your way through. You have to dig a long time to find gold. But once you strike it, it will hopefully make your journey worthwhile.

In this episode, we are faced with a story on cryogenics. Characters cryogenized for centuries are discovered wandering on a spaceship and get back to life. I just loved the idea and while the execution is not perfect and slightly cliché (as Kimmy mentioned in his own review, you've got the rich financier, the Texan macho man, the housewife), it is still well produced and the result is quite nice.

The sub-story, while not interesting, at least provided some drama to support the story and make it not boring. That was quite clever.

At the end of a first season, let me look back and share a few points:
- First, the season is way too long. 26 episodes is an impossible task. Too little budget per episode, but most importantly, too little time. Shooting an episode in seven days seems a daunting task to me. And it shows.
- There was no character development. Nothing lasts. No storyline that keeps ongoing throughout the year.
- There are only 4 very good episodes out of 26 in my mind: Where No One Has Gone Before (S01E06), Datalore (S01E13), Conspiracy (S01E25), The Neutral Zone (S01E26). That's a ratio of 15.3%. Not great.
So, I am looking forward to continue my journey with the second season. Something is telling me the series will become better, and not only because of Riker's beard.