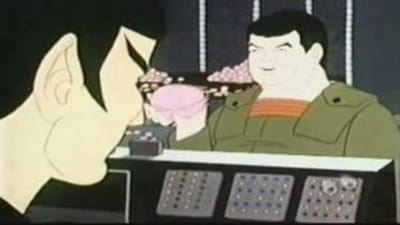 The Enterprise is escorting robot carriers loaded with five-lobed quinto-triticale to Sherman's Planet amidst rumors the Klingons haev a new weapon. The Klingons attack a small scout ship and the Enterprise rescue the single crewman: trader Cyrano Jones. And he has...tribbles. Neither Jones or the Klingons, led by Kirk's ""old friend"" Captain Koloth, will say why they want him dead. It turns out Jones escaped his sentence on Station K-7 (to clean up every tribble) by finding a tribble predator called a glommer. The Klingons attack the robot ships to stop the shipment and reveal their new weapon: an energy innervator that leaves both ships powerless. Meanwhile, McCoy checks out Jones' tribbles and finds out that the tribbles are safe...sort of. They don't reproduce. They just get bigger...and bigger. When Kirk beams the giant-sized tribbles aboard the Klingon ship, Koloth reveals a state secret: they created the glommer and want it back from Cyrano, who ""acquired"" it. Kirk obliges but at

This episode is a sequel to "The Trouble With Tribbles" (S02E15), from the second season of Star Trek. Well, that first episode was extremely bad, so the sequel is unfortunately also very bad.
What is sad about it is that there are two stories in this episode. The one with the Klingons is very interesting and working well. But unfortunately, the infamous tribbles are ruining it.