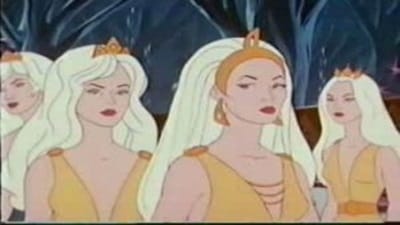 Responding to a distress signal from a sector of space where ships disappear every 27.346 years, the male crewman are affected by a signal. Uhura and Chapel are forced to take command when the male crew onboard starting acting enraptured. On the planet's surface, Kirk, Spock, McCoy, and a redshirt are first greeted than captured by the women and given headsets that suck out their energies and cause their bodies to deteriorate as if they were aging. They escape but in their enfeebled condition are trapped in a giant urn filling with rainwater. Uhura leads a landing party that defeat the women readily and find the men. The women's physiology and life-energy requirements are keyed to the planet, and Enterprise agrees to take them to a normal planet. Using the transporter and the original patterns, they restore Kirk and the others.

- The title of this episode is a reference to the Legend of the Lorelei, which is an old German tale of a beautiful woman who lured sailors to the Rhine causing them to crash on the rocks - analogous to the sirens of Ancient Greek mythology.
- This takes place in 2269.

We are only four episodes into the series and already the animated show has learned from the mistakes of the original series. Once again, I have not seen a single ridiculous costume, which was unfortunately so regular in TOS (The Original Series). In a way, it's sad, because the original series could have been much better, but why should I complain when reviewing a series which is quite good?

At first, when I saw the young ladies from that episode, I thought they would fall for the crew and I was already looking elsewhere, but actually that wasn't the case. The young ladies were actually looking to suck the youth out of Kirk, Spock and McCoy, what an original and cool idea! I really loved it.

Also, since this is an animated series, you would really think that the characters became very old, something much more complex to do in the 1970's on TV.