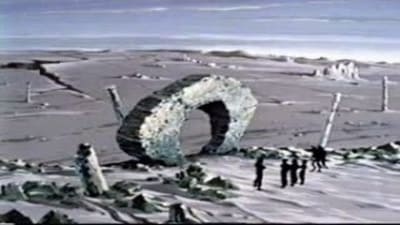 Upon returning from a mission to scan the Guardian of Forever, Spock discovers that there is no record of him serving in Starfleet and he has been replaced by an Andorian first officer, Thelin. Neither Spock nor anyone else who were on the planet have a memory of the Andorian, while no one on the Enterprise remembers Spock! Computer records indicate Spock died as a youngster during a Vulcan ritual, and that they were scanning the Guardian when it was ""running"" that period of time. Since Spock didn't go through to save himself, he altered the timeline. The Guardian sends Spock through where he pretends to be a distant cousin. He meets Amanda and Sarek and an embittered young Spock. Young Spock eventually tries to undertake the desert ritual on his own and is almost killed. His pet sehlat saves him at the cost of its own life before Old Spock can show up. The timeline restored, everything is put back to normal.

- Although Gene Roddenberry declared the animated series to be "non-canonical," many of the details of Vulcan's appearance and culture would be adapted into later Vulcan-centric episodes of Star Trek: Enterprise (2001) and other Trek productions.
- This takes place in 2269 and 2237.
- This cartoon's view of Spock's hometown Shi'Kar has been added to the background in the remastered version of Star Trek: The Original Series: Amok Time (1967).
- Spock's bullying at the hands of other Vulcan children had been previously described by Amanda in Star Trek: The Original Series: Journey to Babel (1967), also written by D.C. Fontana. It would later be depicted in live action form in Star Trek (2009).
- D.C. Fontana included the death of Spock's pet as way of helping children deal with the death of their pets. NBC wanted the pet's death removed from the script but Fontana refused and Gene Roddenberry supported her.
- Spock faces off with school bullying which was later used as a plot with the reboot Star Trek (2009) film. That film and its sequel Star Trek Into Darkness (2013) also involve an act of time travel which enables two differently-aged versions of Spock to meet each other.

WHY?
A great episode, that makes me think why we did not get more episodes of Star Trek with personal mythology. When I look back at all the ridiculous episodes, I am surprised that we had to wait for the animated series to know more on Spock.
In a way, it shows what Star Trek could have been with more money and, perhaps, more time to write.

SPOCK'S PAST
Anyway, the episode is very interesting, we get to learn more about Spock by witness his own childhood. It was actually a somehow courageous move to show a pet of a young child dying. I liked this scene a lot an especially what it meant.

TOO FAST
The beginning of the episode was too fast too me, but the episode lasts just 23 minutes, so I can understand.

VERDICT
I give it 6 out of 10. Very good. The best episode of the animated series by far.