Beyond the Farthest Star 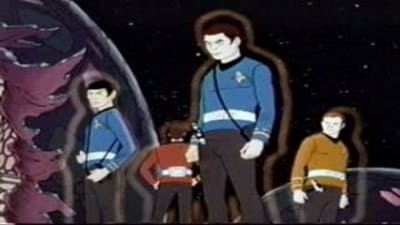 In orbit around a dead star, the Enterprise comes across a huge starship inhabited by a parasitic life form that threatens the entire ship.

Released four years after the end of the original series, Star Trek: The Animated Series is a continuation of the series with the same characters and the same stories. Captain Kirk, Spock, Scotty, Uhura and Sulu are all back. But what's very important is that the original actors are giving their voice to their characters. That alone shows you the level of care that will be provided.

The main concern of Star Trek was that it had quite a low budget. The locations were small and smaller throughout the three years, the costumes often ridiculous. Here, the fact that this is an animated series, suddenly we are able to go one giant step further into science fiction and Space itself.

Indeed, in this first episode, the characters are getting a brand new life-support belts, which lets them travel into Space. Star Trek could never have pulled off something like that. Therefore, making an animated series back in 1973, at a time where there was no computer-generated images, makes perfect sense.

I also liked that Sulu became the temporary Captain of the ship while the others were gone. I also found interesting to see an alien on the bridge, as part of the crew – which, apparently, replaced Chekov for some reasons. It would be an error to think that The Animated Series is not part of the Star Trek universe. Even some of the original writers see this series as the fourth season of Star Trek. So if you are serious, do the work and watch it.

Still, the episode itself doesn't have that magic that the original actors were providing. Their spirit of camaraderie was a big part of the show and not seeing them in live action feels odd.
Not only that, but the story is so far fetched that it is not that compelling and ultimately doesn't really work.