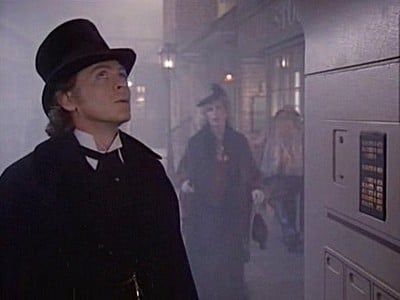 - Picard utters the word "merde", the French for "shit". As it was said in a foreign language, it passed the TV censors. Merde is sometimes euphemistically translated as "damn" in subtitles.
- Although it is commonly believed that Sherlock Holmes has been in the public domain since sometime before the 1980s, the Sir Arthur Conan Doyle estate maintained copyright on the character - a claim set to expire in 2023 - until their claim was voided by a court ruling in 2013, ten years ahead of the planned date. Paramount Studios (producing company of the Star Trek franchise) obtained permission from the Doyles to make Young Sherlock Holmes (1985) (acknowledged in that movie's end credits), but considered similar permission unnecessary for "Elementary, Dear Data," which they believed fell under the parody clause of copyright law, and thus aired the episode without notifying the Doyles. (ST:TNG producer Jeri Taylor, who joined the show in 1990, once incorrectly wrote that Paramount was wholly ignorant of the Doyles' property, but Doyle attorney Jon Lellenberg straightened this out.) The Doyles then wrote to Paramount that they were flattered by the episode, but felt it remained within their legal sphere, so they wanted in on any further Trek usage of their characters. Although Brent Spiner was eager to play Holmes again, nearly 4 years went by before Paramount and the Doyles agreed on a "reasonable licencing fee" for the sequel Star Trek: The Next Generation: Ship in a Bottle (1993).

A holodeck adventure that spills over to the real world: one has to wonder who was the IT engineer who gave user rights to holodeck AIs to interact with the rest of the ship. Seeing Data, LaForge and Pulaski in a late 19th-century London setting and attire is indeed very cool, and the casting of Moriarty was excellent! We get to know more of Dr. Pulaski, vastly different from the underdeveloped Dr. Crusher, and perhaps McCoy-like in her humor and attitude; also, having a character who has difficulty in treating Data as anything else than a machine was a very good move and sets up future developments.


Directed by Rob Bowman, the episode is very convincing and well produced. It is light but still has a dramatic tone once we realize that the holodeck is able to control the ship.
Guest actor Daniel Davis, mostly known for playing the butler in The Nanny, is perfectly cast and gives a great performance of Professor Moriarty.