Where Silence Has Lease 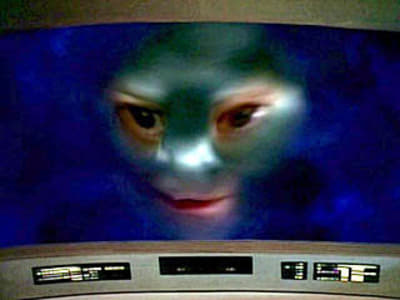 - The music that plays in the background while Picard is in his quarters near the end is Erik Satie's "Gymnopedie #1".

The most elementary and valuable statement in science, the beginning of wisdom, is 'I do not know.'
— Data

Season 2: changes behind the camera, changes before the camera. After many TOS writers left during season 1 because they couldn't get along with Roddenberry, it is Roddenberry that begins to be much less involved in season 2; Maurice Hurley essentially becomes the showrunner, inserting more character development in the episodes. Dr. Crusher is replaced by Dr. Pulaski (producer conflict over McFadden's acting, it seems), quite unceremoniously. A writers' strike will also impact the organisation of producing the series in the first half of the season, and there will be "only" 22 instead of 26 episodes.

In this episode: Star Trek encounters a big blob in space which is a sentient entity that plays games with them: it's very pulp scifi-ish and the pitch sounds like the reason why many people don't watch Star Trek. The interesting part is the entity's curiosity about humans and the concept of death -- which triggers a similar curiosity in Data. This gives the opportunity for Picard to talk about his view of metaphysics and his definition of a soul; unexpectedly he is not a pure materialist, despite the mostly purely god-less worldview of the Star Trek universe.

The quote:
Data "Captain, the most elementary and valuable statement in science, the beginning of wisdom, is 'I do not know.'"


I found this episode quite interesting. An alien life form is judging the human species and this makes for some enjoyable drama.