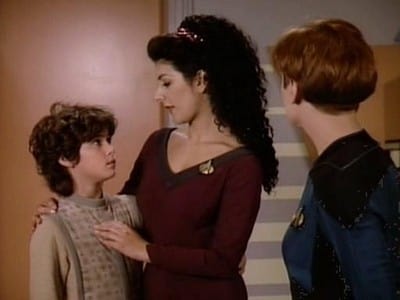 - Actress Gates McFadden (Dr. Beverly Crusher) left the series at the end of the first season and was replaced by Diana Muldaur as Doctor Katherine Pulaski at the beginning of the second. An official announcement stated McFadden had left the series to pursue other career options. McFadden herself got a call from her agent who told her the producers had decided to go in another direction with the character. Like the other cast members, McFadden was surprised. Thanks to a letter-writing campaign, support from Patrick Stewart, and a personal invitation from executive producer, Rick Berman, McFadden was brought back to the TNG cast for the third and subsequent seasons, with her only three appearances for season two being stock footage. In an interview in May 2006, Berman revealed the actress was fired at end of the first season of The Next Generation because head writer Maurice Hurley "had a real bone to pick" and did not like her acting. After Hurley departed the show's writing staff, Berman brought the actress and character back.
- This was Marina Sirtis' least-favorite episode.
- First appearances of the significant recurring characters Dr. Pulaski and Guinan.
- Promotions: Geordi rises in rank from lieutenant junior grade to full lieutenant.
- Jonathan Frakes returned to rehearsals at the start of the second season sporting a beard with the intention of shaving it off before shooting began, but the producers liked it and asked him to keep it. It remained for the rest of the show's run. (He eventually shaved it off during an ending scene of the movie Star Trek: Insurrection (1998)).
- This is the only second season episode to reference Beverly Crusher. She will be seen in archive footage in Star Trek: The Next Generation: Shades of Gray (1989).
- This is the first episode where Wesley Crusher wears a communicator, even though he was made an acting ensign in Season 1 and there is nothing to indicate a status change since that time. Wesley also debuts his gray "acting ensign's" uniform, which he'll wear until the end of the third season's Star Trek: The Next Generation: Ménage à Troi (1990).
- This episode marks the first appearance of Ten Forward. A reorganization of the sets after the first season created space for a new set, and the producers decided to introduce a space where the crew could be seen interacting when they were off duty.
- Troi is seen wearing a new hairstyle, which is kept throughout the rest of the season.
- This season introduces a number of changes to existing sets and new ones that make up the Enterprise. Ten Forward is seen for the first time (although in the series finale, it is indicated it existed during the first season), the set used for cargo bays is often used as one of the shuttle bays, Sickbay gets a few tweaks such as overhead lighting along the wall where the biobeds rest, and the port-side hallway that leads to the observation lounge loses its standard ship corridor wall dressings. Also several elements on the bridge have been redesigned.
- The script for this episode was one of three originally written for the "Star Trek: Phase II" spin-off series originally set to air in 1978 but ultimately abandoned. In the original script, a being of light impregnates Lt. Ilia (Persis Khambatta) to experience life as a Deltan. The Lt. Ilia character from this defunct series went on to appear in Star Trek (1979), based on "In His Image," one of the other Phase II scripts. The third story was called "Devil's Due," and elements of it were later used in Star Trek: The Next Generation: Devil's Due (1991).) Will Decker from Phase II and ST:TMP was the basis for Will Riker in Star Trek: The Next Generation (1987).
- The film Starman (1984) is considered a possible influence behind "The Child".
- There seem to be some thematic similarities to Antoine de Saint-Exupéry's novella The Little Prince, where a powerful alien being comes to Earth to learn about its people, assuming a childlike form with paranormal abilities. He fears that there will be no welcome for him, and departs the planet in another form, so that his human child self appears to die.

The story of the episode is very bad. The concept is that an alien life form impregnates counselor Troi, which then delivers the baby in less than a day. The baby grows into a child in a couple of hours and dies. The morale of the story? The alien entity wanted to learn about humans, hence why it fucked her and grew fast. Just horrible. Science fiction stories with babies are always bad, always.

There are some welcomed changed in this second season. First, Wesley finally getting rid of his rainbow sweater and is getting a much, much better uniform. Second, the sets have been updated and we even get some new ones, such as the bar.

Also, actress Whoopi Goldberg appeared as a recurring character. You cannot not like her smile.

But one last change was the removal of Dr. Beverly Crusher, for no good reasons. Behind the scenes, the actress received a phone call from her agent, saying she was fired. Apparently a producer didn't like her. That's a shame because there was clearly something to explore in her relationship with Picard. Instead of that, they replaced the doctor with another character. This was really not good.