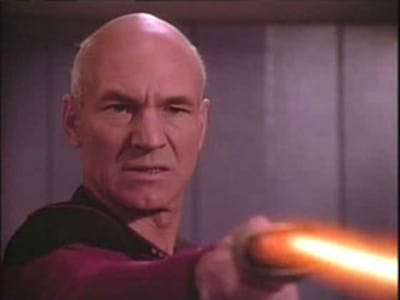 - This episode marks the first appearance of a Bolian, the blue-skinned race named after Star Trek veteran director Cliff Bole.
- Gene Roddenberry originated the idea for the episode in a single-sentence proposal entitled "The Assassins". Robert Sabaroff expanded this idea to thirty pages, but his version was seen as too expensive. Tracy Tormé was then given the job of rewriting it, but some producers thought the new version was too dark until Roddenberry saw it and endorsed the new version.
- This is the last appearance of the Starfleet Admiral's uniform which was seen through the first season of The Next Generation. The uniform, notable for its "triangle pip" insignia, was replaced in season two by an interim uniform which used the more familiar "boxed pip" insignia. By season three, the admiral's uniform was changed again to become the standard which was used for the rest of the series.
- Ward Costello and Robert Schenkkan reprise their roles from Star Trek: The Next Generation: Coming of Age (1988).
- The banquet worms were mealworm beetle (aka Tenebrio molitor aka darkling beetle) larvae. These protein rich larvae are a favorite food for pet reptiles and, because you can buy them by the pound at almost any pet store, the go-to-grub for movies and TV.
- The director of the episode, Cliff Bole, was a school friend of makeup supervisor Michael Westmore.
- This episode was not banned by the BBC, but edited to remove the shot of Remmick's head exploding.

Alien invasion! Mind control bugs! Very 1980s practical gory effects! This is TNG going full John Carpenter! A great episode managing tension very well, particularly with Riker and Picard's infiltration of Starfleet Command -- which is oddly very empty of people (no budget left for extras?). This is the first time we see the San Francisco-based Starfleet Command and Earth in general in TNG, and I would love to see more of it.

Alumni-spotting:
The man with the peculiar physique, Michael Berryman, is an alien ally here and was Owen Jarvis in The X-Files' "Revelations". Also, this was written by Tracy Tormé, who would create "Sliders" a few years later.

The quote:
Captain Keel, with a recurring line for all conspiracy-themed works it seems: "Don't trust anyone!"


Finally! After 24 episodes that were mostly bad, Star Trek: The Next Generation finally offers us a great episode. Where No One Has Gone Before (S01E06) was already quite good, but this one takes it to another level.

First, the music is top notch. Perhaps not really the music itself, but the music cues and effects. They highlight the drama in quite an effective way.

Which brings me to drama. This episodes is simply perfectly crafted. The scenario is great and gives director Cliff Bole the opportunity to deliver a great episode.

The gore climax was stupendous. The old guy kicking ass was excellent, with his both sharp and evil gaze. And seeing the return of the old annoying guy that made an investigation on Picard was simply an excellent idea.

VERDICT
I give it 7 out of 10. Without any doubt the best episode of the series yet.